Follow the journey and see how God is blessing us daily

As you may have already noticed, we have been trying to do posts from each team member to give you various perspectives from the trip.  Its been so neat to read through how each us took in the details, people and experiences.
Noah, is a very special little boy at Sangaalo whom we met during our time there.  You will read about him in Steven’s post below… this sweet boy touched so many lives on our team!  I’m excited to share more posts with you soon.
From the words of Steven…
“As we stepped off of the plane, I instantly recognized the country of Uganda. The site, sounds, smells, mosquitoes, and weather- I breathed it all in and became excited to start working. During our first day, we visited our main ministry, Sangaalo orphanage. As we looked around, I was both impressed with how well Damalie and the “aunties” took care of all 18 children, and equally sorrowed by the lack of resources they had to care for these children. I immediately asked Damalie if she had any sick babies that I could assess and possibly give medical treatment to. Her eyes lit up and said, “Yes! I have a few sick babies I need you to see.” Armed with my stethoscope and thermometer, I set up my supplies on a small bench outside one of the buildings. As the first baby, Grace, sat onto my lap, I could immediately tell she was sick.
Grace was pouring drainage from her nose, had a productive cough, her lungs were loaded with crackles and wheezing, and she had a mild fever. My initial impression was possible pneumonia and bacterial infection. I asked if she had been to the doctor recently, and Damalie told me that she was given a prescription for Amoxicillin by a local pediatrician, but it was discontinued after five days when she started showing signs of improvement. I told her to keep her on it for 10 days, and to use Tylenol as a fever suppressant. 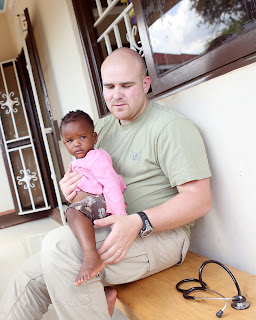 The next two children, Sam and Noah, had an axillary temperature of 104.xx degrees. Sam was alert and active, able to eat and tolerate oral medicine. I taught Damalie how to rotate Tylenol and Ibuprofen for the fever suppression, and cautioned her to keep him hydrated. 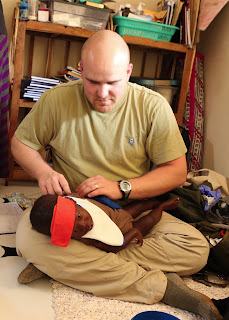 Noah, was by far the most ill child I saw. Noah was lethargic, inactive, had a glazed appearance, and hot to the touch. Upon assessment, Noah had an axillary temperature over 104.xx degrees, decreased capillary refill, poor skin turgor, he had not urinated in over two days, no bowel movement in two days, and was refusing to eat or drink for over a day. I immediately told Damalie that he needed to go to the hospital now. She relayed that there were no clinics open at this time, and she was not able to take him. Our team decided to take Noah and care for him back to our Guest House. Knowing that this was the only care Noah could receive tonight, we hastily agreed to take Noah back with us. Our missionary friend, Kari, informed us that her husband was a paramedic and had some medical supplies at home that we could use. We loaded up and went straight to Kari and Jason’s house. 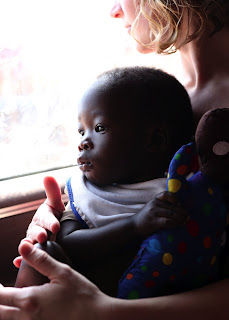 We laid Noah onto their kitchen table; I search for a viable vein and found a small one in his left antecubital. With a quick prayer and a sweaty brow, the Lord steadied my hands and we obtained a good blood return with a 24 gauge needle. 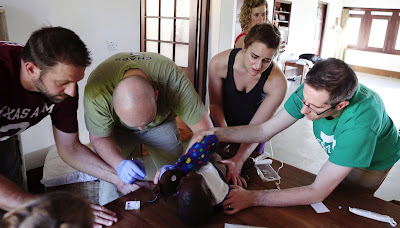 We secured Noah’s arm with an arm board and let 500 ML of Normal Saline drain into the little guy over a couple of hours. During this time, we were able to rotate Tylenol and ibuprofen orally into his system to break the fever. Later that evening, Noah ate some rice, beans, and he drank some milk.  Noah stayed with Jessica and Sarah throughout the night as he recovered. When the morning came, Noah had soaked his diaper and seemed well hydrated.  He was active, playing, and eating! In the end, I smiled in my heart of hearts, because we helped in saving a child’s life. This was only the first of ten days in the country of Uganda and I already felt God’s hand of providence upon me and the children of Sangaalo. If I did nothing more this entire trip, it was worth it.
Despite God’s grace in assuring me of my medical skills on that first day, the Lord also humbled me, further into the trip. During the last day, we went back to Sangaalo and we encountered another very sick baby. This child was very lethargic, not drinking or eating, no wet diaper for a day. This time, I was armed with IV needles and fluids! I immediately went to work on this child in order to help him. I failed three times to get a working IV on him, UGH! As I sat there, holding him and attempting to get him to sip pedialyte; I was talking to Kari and telling her how I was frustrated that I couldn’t help him and this was the last day I could even try. I remember her telling me, “Well, you have to remember. The Lord took care of Him long before you were here, and he will take care of him after you are gone.” I think the Lord needed me to understand that even though He can use me in a mighty way, He also doesn’t need me. I wouldn’t even be available to help the children of Sangaalo the next day.
That very morning, in my devotions, I prayed that the Lord would keep me humble in my actions. I prayed that I would never think that my skills are so great, but to give God the glory in enabling me to provide care.
After leaving Sangaalo in the morning, we went with Kari and Jason to see their ministry among a local village, which was off the beaten path. Jason and Kari visit this small, mud-brick hut, village every week. During their visits, they set up a small medical clinic (two tough boxes and a few personnel), they preach the gospel, sing songs, and play games. I had the pleasure of helping Jason with his medical clinic that afternoon. We tested 4 kids for malaria, 3 of the 4 came back positive, we identified possible pneumonia, TB, skin infections, and uncontrolled fevers. The clinic went well, but Jason told me that they always have to pack up before they can see all of the children, so unfortunately we had to leave before everyone could be seen.
Many more experiences took place on this trip. During one day, we visited a ministry called Serving His Children. I was very impressed with this ministry. The woman who started it, Miss Renee, went to Uganda right after high school and started a feeding program which blossomed into the leading authority, for all of Uganda, in treating malnourishment in children. Miss Renee never had any kind of formal education in medical care, but she is leading a group of Ugandan nurses in identifying various kinds of malnourishment, mixing feeding bags, inserting NG tubes, inserted pediatric IV’s including EJ’s, dealing with respiratory arrests, cardiac arrests, giving blood products, providing education to families, and much more. This ministry touched my heart because it’s a beacon of hope, not only medically, but it shine’s the light of Jesus Christ to the families whose lives they impact. I am excited that Voices 4 the Voiceless will partner, with Serving His Children, in order to help them acquire medical equipment as they help us acquire items for Sangaalo.
I learned a lot during this trip; I met great people; I became better friends with people I already knew; and I am walking closer to the Lord. I feel as though the Lord is drawing me back to the missionary field to serve on more trips, and hopefully someday, with my wife and daughter. While we were traveling to the remote village, we passed a “Teen Mission Int’l” sign, and I immediately recognized the site where I served on a short term trip 10 years ago. We pulled in, and I surveyed the area where I slept, ate, and worked for a month and a half. Many sites looked the same, but our work project was completed that we initiated long ago. We set the foundation of a dormitory building, and completed the walls and floor, for Bible school students, back then. I took a tour of the completed dormitory-full of rooms, showers, and toilets. Even though a main building was complete, there was still a larger foundation set by our team which had not been built on yet. Much like my life, the Lord set my foundation in missions back then; He has molded me, but not nearly finished with me yet. I look forward to the future of missions in my life.”  – Steven
Jeremiah 29:11; Philippians 1:6
**Most recent picture of Noah
{end of week before we flew home} 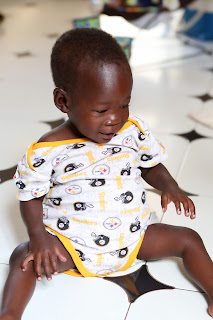